When it comes to entrepreneurship, there’s a lot of generic advice that gets tossed around. One such piece of advice is to “follow your passion.”

It sounds great on the surface, but there’s often issues with this approach – especially if we’re talking about bootstrapping.

The main issue is that just because you’re passionate about something doesn’t mean there’s a market for it. As a result, you could end up spinning your wheels and pursuing something that is bound to fail no matter how much passion you inject into the project.

If you’re a first time entrepreneur, you’re likely better off following the money than you are following your passion. Once you’ve achieved a certain level of financial success and stability, then you can start focussing on the passion part of it.

This may seem like a long drawn out approach, but your chances of success will likely be higher if you focus on profits first.

This is the approach that I’ve taken and it has worked out better than expected. In this article, I’ll share what this looks like in practice and build on one of my favourite mental models for bootstrapped startup founders.

Several years ago, Rob Walling introduced a framework called The Stairstep Approach to Bootstrapping. The thesis he lays out is that rather than chasing moonshots or starting complicated businesses right out of the gate, entrepreneurs should “stairstep” their way up the ladder of entrepreneurship.

The reason being is that you need to develop your entrepreneurial chops before you’re likely to find success with complicated business models. It’s much easier to make money off of an info product than it is to grow a full fledged SaaS app, all things considered.

Rob then lays out the following path:

Although I didn’t follow Rob’s framework exactly as he laid it out, my entrepreneurial journey (and that of my-cofounder) was more or less the same as prescribed.

After initially spinning our wheels launching things that we shouldn’t have, we eventually launched a marketplace for Bootstrap themes and templates in 2014. In retrospect, this wasn’t the ideal “Step 1” business because we had to worry about satisfying both buyers and sellers. Nevertheless, the templates were one-time sales and we grew it by focussing on a single marketing channel (SEO).

A year into the business, we were generating a modest profit but not significant enough to live off of long term. We also came to the realization that it would be an uphill battle to make it a legitimate full-time business since we were competing against other marketplaces that had a head start and much bigger network effects working in their favour.

At this stage, we wanted to take the next step in our journey and it just so happens that we had a blog post about free stock photos that was generating a significant amount of traffic. We decided to leverage that blog post and create StockSnap, our own free stock photo site. Finally, we leveraged both of those properties to launch Snappa, our “Step 3” business.

For the sake of brevity, I’ve condensed this section quite a bit. If you’re interested in learning about the journey more in-depth, along with the specific marketing tactics we used, then listen to my talk from MicroConf.

As far as bootstrapping goes, Snappa has exceeded my wildest dreams. When we first started, building a 7-figure SaaS app seemed like a daunting task. Now five years in, we’re generating $135k in monthly recurring revenue and working towards a $2M annual run rate. I have a lot to be grateful for.

That being said, as my bank account has grown and I’ve taken myself out of the day-to-day operations, I’ve come to the realization that Step 3 isn’t the final step in the entrepreneurial journey – at least for me.

As much as I love Snappa as a business, I’d be lying if I said I was deeply passionate about the problem we’re solving. The reality is we started the business because we spotted an opportunity in the market, not because we had some burning desire to make graphic design software.

All of this caused me to start asking myself: “What’s next?” And it dawned on me that there was a fourth and final step I wanted to reach in my entrepreneurial journey: personal passion.

If our main goal was to maximize revenue in the short-term, what we probably should be doing is launching another B2B SaaS app that’s adjacent to Snappa. However, this just didn’t sound very appealing to me.

Now that I’ve reached a certain level of financial freedom, my mindset has shifted more towards building things I’m passionate about that I can work on for the foreseeable future as opposed to maximizing short-term profit potential.

Fortunately, my co-founder and I are very aligned on this. For us, this project is Bitbo. It’s currently just a one page dashboard, but it will gradually evolve beyond that. 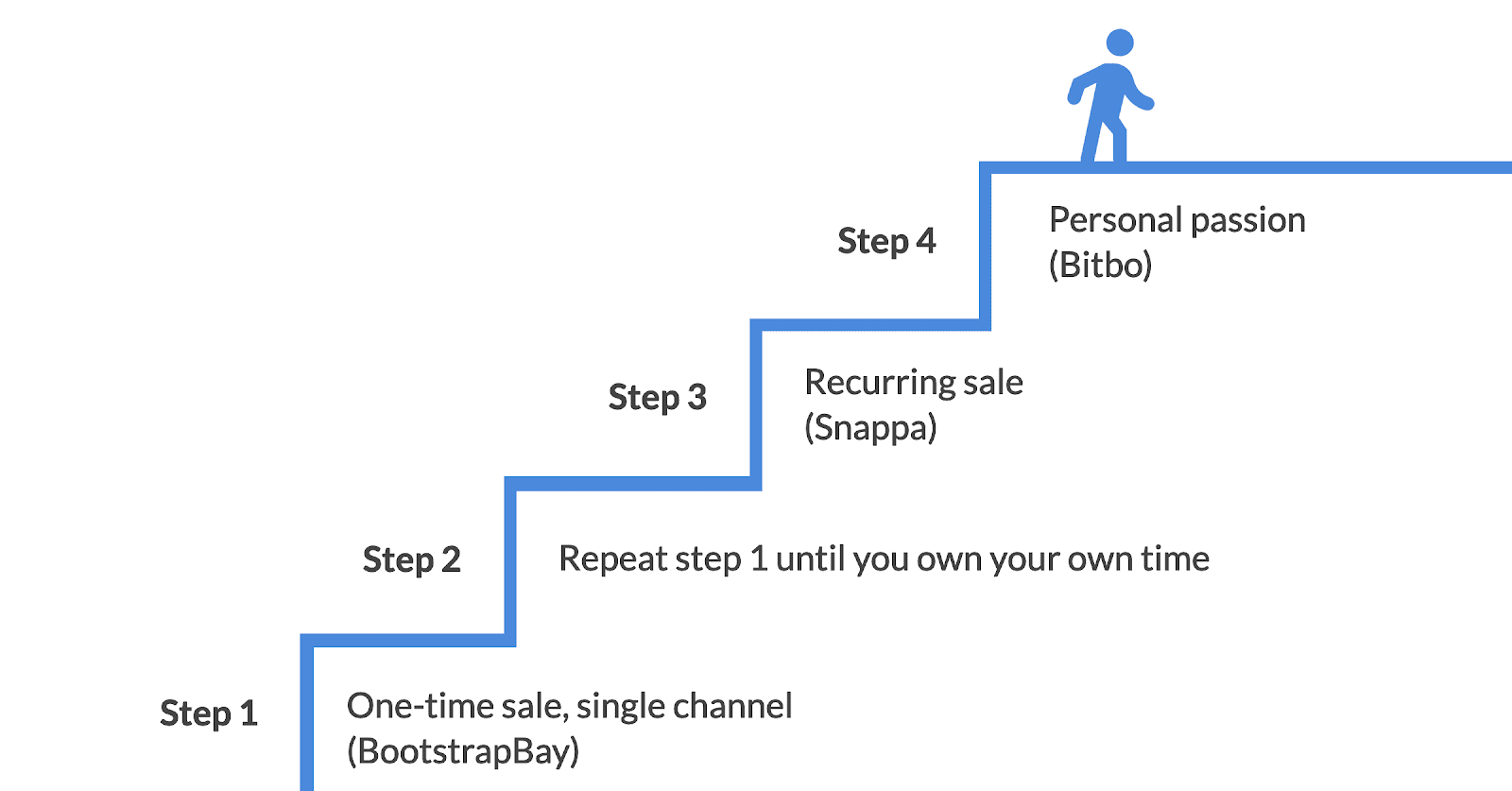 Although I’ve laid out the investment case for Bitcoin in a previous post, I genuinely believe that Bitcoin has the power to change society for the better. And as I look into the future, I think the need for a fully decentralized form of money that cannot be manipulated will become more apparent to the average individual as well.

Bitbo gives my co-founder and I the opportunity to combine our love of software and entrepreneurship with our personal passion for Bitcoin. The reason we can work on this without the need to generate revenue in the short-term is the fortunate position we’re in: to have a reliable SaaS app that continues to kick-off cash flow. If we were starting at the bottom of the staircase, there’s no way that we’d be able to launch Bitbo right away.

And that reveals the true power of the stair step approach. It may sound tempting to jump right into your personal passion, but I urge you to consider building a strong financial base first. Once you’re on strong financial footing, you can play the long-game and not worry about generating profits in the short-term.