In March of 2015, my co-founder Marc started writing the first few lines of code for Snappa. And in order to start collecting email addresses, we needed to throw up a landing page.

Since Snappa.com was taken, we registered Snappa.io and ran with it. But two years later, we ended up purchasing the Snappa.com domain for $40,000 USD. (Deal terms to follow).

After making the announcement, I couldn’t believe how many people were interested in the purchase. In turns out that many founders were also trying to acquire a domain and wanted to know how the deal went down, how much we paid, and what we learned from the experience.

Rather than going through the details with each person individually, I thought it would be more useful to share the entire story in a blog post. My hope is that other founders considering a similar purchase can get value from this post.

So here’s the whole story of how we purchased the Snappa.com domain.

Why we did it

Some people would argue that we were doing just fine with Snappa.io and purchasing the .com was a waste of money. Doesn’t everyone type stuff in Google now?

The reality is we were doing just fine. We had grown to $25k+ MRR without raising any money. So why did we care so much about a domain name?

At the end of the day, .com will forever be the ultimate top-level domain (TLD). To this day, there are still plenty of people who don’t even realize that other TLDs exist.

When you own the .com, you’re signalling to the market that you’re legit. And when people are paying you money to use your product, the more trust you can convey the better.

With Snappa, many of our customers pay us an annual subscription. We want them to know that we’ll be around for years to come.

As Joel from Buffer points out, most well-known companies all had “placeholder” domains for a long time before they got their actual name as their domain too:

But each one of these companies reached a level of scale where owning the .com was important. Otherwise, they would have used their placeholder domains forever.

Since we’ve been around for nearly 2 years, we felt it was time to legitimize our company further by purchasing the .com.

Even though most people do in fact type things in Google, there are still a lot of people that don’t. A lot of these people will assume that web addresses end in .com.

In fact, we received a few support requests from users saying that our app was down. It turns out they were entering Snappa.com as the web address (which used to lead to a blank page).

I always thought to myself… how many people were doing the same thing?

In addition to customers entering the wrong URL, we also noticed a few blogs and websites linking to us using the wrong URL. This means we were missing out on referral traffic and link equity.

Last year I attended MicroConf in Las Vegas (which is a great conference by the way). One of the speakers was Peter Coppinger from Teamwork.com.

During his talk, he told the story of how they purchased Teamwork.com for $675k. I was floored…

Then he threw up this slide. 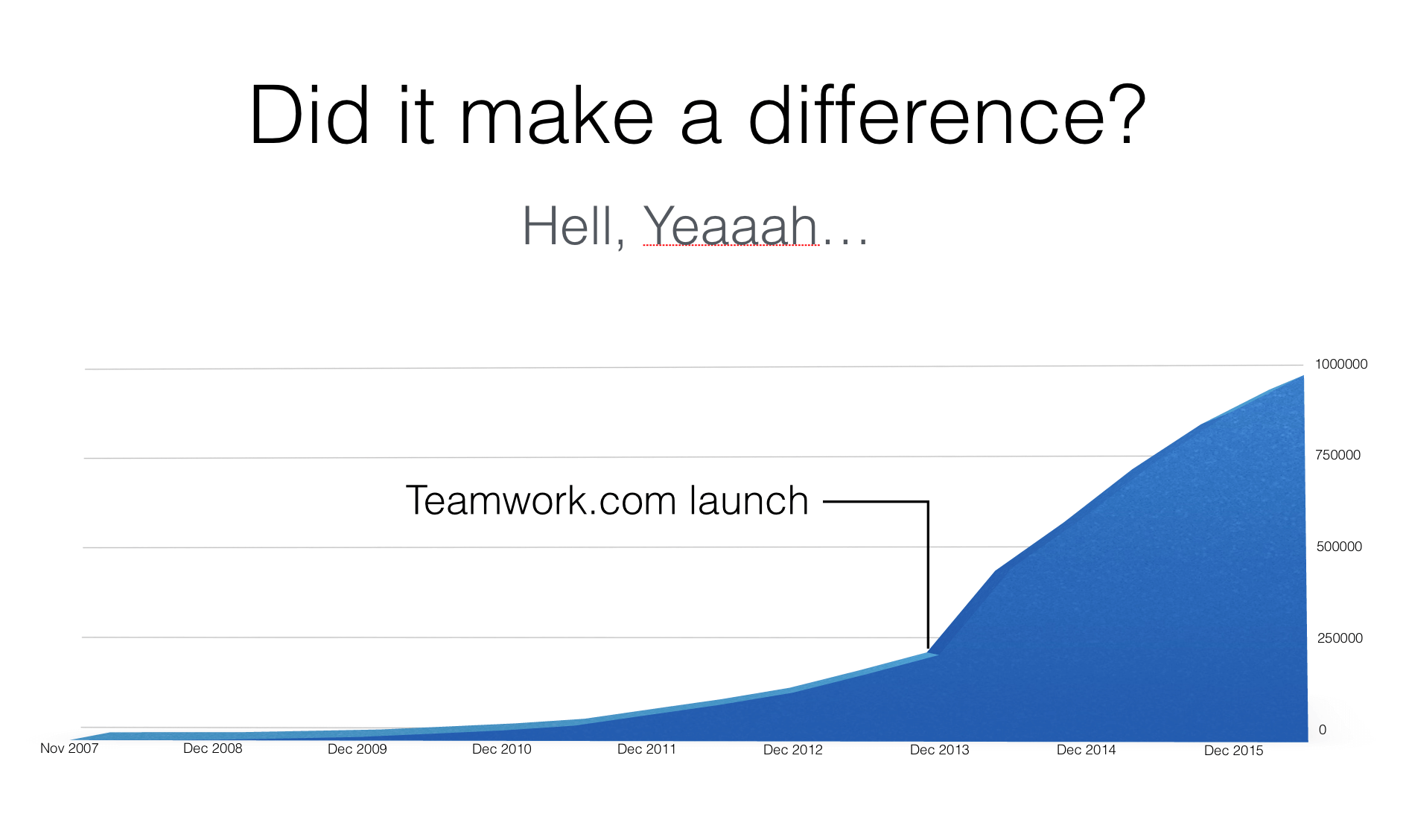 It goes without saying that purchasing the .com wasn’t the only reason their growth exploded. It’s also worth noting that their old domain name was TeamworkPM.net which was pretty horrible.

However, there’s no denying the inflexion point that happened immediately after launching the new domain. Could the same thing happen to us if we purchased Snappa.com?

After we launched our beta in the Summer of 2015, we were getting some really good traction. So in September 2015, I decided to reach out to the owner of Snappa.com to see if they would be interested in selling. I figured they’d want more than we could afford but figured it was worth a shot.

As Buffer mentions in their acquisition story, there’s a variety of ways one could go about contacting a domain seller. Some tactics involve emailing from a Yahoo address, to hide your true identity to make yourself appear like a smaller company or letting a different entity altogether work on getting the domain.

Luckily, we were a small company. I also felt that at some point in the negotiation I’d have to reveal my true identity anyways, so I didn’t put too much thought into deceptive tactics.

Here’s the the first email I ever sent the seller. I used my real name and personal Gmail account.

A couple days later, Marc and I were having lunch at a restaurant when my phone buzzed. It was an email from the seller containing a domain name transfer agreement.

I scanned through the document and eventually saw the purchase price…

At that moment in time, we had 0 paying customers because we were still in beta. Naturally, we decided to put our dreams on hold.

A month ago (February 2017), I heard the news that Noah Kagan spent $1.5M to acquire the Sumo.com domain and I thought he was crazy.

Then I listened to his podcast episode where he talked about the acquisition. He mentioned that a good domain equals a legit company and it lets you own your brand and be the definitive source. Because so many other companies had ‘Sumo’ in their name, Noah wanted to position his company as the original, the de facto.

As I reflected more on the purchase, I realized that Noah wasn’t crazy. In fact, I applauded him for such a ballsy move.

I also learned two things from Noah that helped me acquire Snappa.com.

Feeling inspired, I reached out again to the owner of Snappa.com on February 8, 2017 (one year and five months after my original email).

Even though the original transfer agreement they sent me said the price was non-negotiable, I knew that just wasn’t true. So to get the ball rolling, I sent a low-ball offer of $10,000 USD to feel them out.

A few days later, I got a new domain name transfer agreement…

A $5k increase from the previous year. Not looking good…

Determined to negotiate, I fired back the following email.

The seller responded that they’ve already turned down another offer far above our original offer of $10k. They also asked if we’d consider a payment plan.

Even with a payment plan, $84.5k was out of the question. So I fired back another offer and increased our offer to $20k.

That same day, I received the following email.

At this point, I called Marc and we had a lengthy discussion about how important it was to own Snappa.com and what was the maximum amount of money we’d be willing to pay for it. Considering how far apart we were with the seller, I felt like we had to give them our best offer to even get a chance of acquiring the domain.

Remember that Snappa is 100% self-funded. We’re not sitting on a pile of cash that we raised from investors so we have to be very careful with how we spend our hard-earned cash.

After talking with Marc, we agreed that $40,000 USD was the absolute most we wanted to spend on the domain. Also, we couldn’t afford to pay the $40k up front because it would put a serious dent in our cash flow. We needed to make sure we had adequate funds to cover all our costs in case of an emergency.

I then fired off an offer of $40k USD with a 5 year payment plan. Once again it was turned down.

Even with a payment plan, $59.5k was still more than we wanted to pay and $50k upfront was out of the question. So I decided to stand strong and give the absolute best offer that we could.

I had high hopes, but they came crashing down quickly when I received the final blow.

I was pretty disappointed. But we just couldn’t justify spending that kind of money on a domain name as a bootstrapped startup.

I also remembered an important tactic when it comes to negotiations…

Be willing to walk away.

And that’s exactly what I did. I stood firm and let the seller know that we couldn’t justify their asking price and that we’d carry on with our current domain name. They came back with one final knockout blow.

It sucked. Over the next few days, I started coming to terms with the fact that we may never own Snappa.com.

Then out of the blue, 5 days after our previous exchange, I received the following email.

We finally agreed on a purchase price of $40,000. The final deal terms were $20K paid up front with the remainder paid in annual instalments over the following 3 years.

As soon as the DNS was changed and the agreement was signed, I wired over the first payment on March 1, 2017.

The entire process was very stressful. After our final offer was accepted, I couldn’t help but wonder if we were making the right decision. We certainly didn’t have a crystal ball that could tell us what the impact of having Snappa.com would be in the long run.

But now that we’ve fully transferred over to our new domain, there’s no doubt in my mind that we made the right decision. It just feels right.

As I look back on the experience, a few key lessons jumped out at me, some of which I alluded to throughout the post but I think they’re worth repeating.

2. If you really want something, you have to be persistent. There’s no way this deal would have gone through if we weren’t persistent. Despite multiple offers being rejected, we kept trying until we succeeded.

3. Be willing to walk away. Negotiating is all about leverage. If the person on the other end knows that you want something REALLY bad, they’ll make you pay for it. They only accepted our final offer after we made it clear that we weren’t going any higher.

4. Be vulnerable. The truth is, we were a small startup. We didn’t have $84k to spend on a domain name. Without sounding like a charity case, we did try to drive the point across that we only had so much that we could offer.

5. You can negotiate on more than just price. If we had to pay $40k up front, we wouldn’t have been able to make this deal. The payment plan is what made this feasible. If you’re negotiating something and you can’t justify the price, try to defer payments in order to ease the financial burden. In the case of domain names, the seller will still technically own the domain until they receive the final payment. Therefore, there’s zero risk on their part.

Only time will tell whether or not the $40k investment yields a positive ROI. Then again, we may never know.

But regardless of whether or not the investment pays off, we never have to worry about another business using Snappa.com. That in itself is priceless. Now we can go back to building a kickass product!

Don’t let a domain name stop you from starting your business. If I had to rank the importance of a domain name when starting up, I’d give it a 3/10. Your preferred domain name will probably be there waiting for you when the time is right.

Comments on this entry are closed.